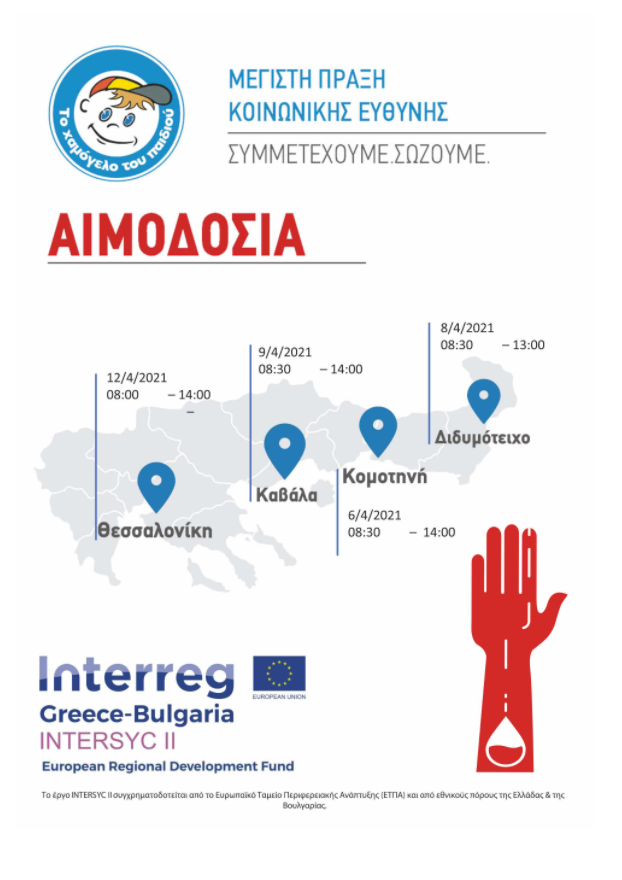 carried out in the framework of the "INTERSYC II" project

Maximum Act of Social Responsibility by the people of Komotini, Didymoteicho, Kavala and Thessaloniki

The Voluntary Blood Donation Actions carried out by "To Hamogelo tou Paidou" in Komotini, Didymoteicho, Kavala and Thessaloniki, from 6 to 12 April 2021, in the context of the implementation of the project "Integrated Spatial Synergies" were successfully and successfully completed. for Integrated Territorial Synergies for Children Health and Protection II - INTERSYC II ", with the aim of strengthening the National Health System and making a substantial contribution to tackling the Covid-19 pandemic.

141 bottles of blood were collected thanks to the direct participation and mobilization of the society, as well as the support of the local bodies, associations, companies, organizations, associations, companies and volunteers of the Organization "The Smile of the Child", who recognizing the necessity and value of voluntary blood donation, which is the maximum act of social responsibility, contributed to the successful completion of the action. Particularly moving was the participation of young people from each region, who conveyed their own optimistic and hopeful message in favor of volunteering and offering to fellow human beings.

The actions were implemented in "ODYSSEA", the 1st Mobile Laboratory of Information, Education & Technology of the Organization, which being the most suitable place for the safe conduct of actions and the observance of all the prescribed preventive measures, traveled to Komotini, Didymos Kavala and Thessaloniki on 6, 8, 9 and 12 April 2021, respectively.

On Tuesday, April 6, 2021, a Voluntary Blood Donation Action was held in Komotini under the auspices of the Region of Eastern Macedonia - Thrace and in collaboration with the Municipality of Komotini and the "Sismanogleio" General Hospital of Komotini. The action was supported by the Local Government Development Organization Societe Anonyme K. KARATHEODORI, the Democritus University of Thrace and the Robotics & Programming Team of the 3rd GEL Komotini.

On Friday, April 9, 2021, a Voluntary Blood Donation Action was held in Kavala under the auspices of the Region of Eastern Macedonia - Thrace and in collaboration with the Municipality of Kavala and the General Hospital of Kavala.

On Monday, April 12, 2021, a Voluntary Blood Donation Action was held in Thessaloniki under the auspices of the Region of Central Macedonia and in collaboration with the Municipality of Thessaloniki and the General Hospital of Thessaloniki "Agios Pavlos". The action was supported by the Metropolitan Unit of Thessaloniki, the Thessaloniki Tourism Organization and the company KLEEMANN.

The above Actions are part of the project "Integrated Territorial Synergies for Health and Child Protection II (Integrated Territorial Synergies for Children Health and Protection II) - INTERSYC II", which is implemented under the European Territorial Cooperation Program Interreg VA "Greece -Bulgaria 2014-2020 ”, with the main beneficiaries the Foundation“ Center Nadja ”- Sandanski Branch - Bulgaria, the Regional Department of Education - Blagoevgrad - Bulgaria, the Development Organization of Local Self-Government Societe Anonyme K. KARATHEODORIS and its lead beneficiary ».

"The Smile of the Child" continues the successful implementation of the project "INTERSYC II - contributing substantially to tackling the Covid-19 pandemic through the implementation of a series of actions such as:

● Voluntary Blood Donation Actions in close cooperation with public authorities such as Municipalities and Public Hospitals and in the regions of Northern Greece,

● The Provision of Psychosocial support for children and families through the operation of the European Support Line 116111 and the National Line SOS 1056 which operate "The Smile of the Child" 24/7, 365 days with specialized psychologists,

● Online Training Seminars for educators & school psychologists with the aim of preventing and informing about the action around Covid-19 and viral infections in order to be able to support and advise students, parents and other professionals in school communities with the proper way.

To date, preventive medicine examinations have been performed on more than 6,500 children living in cross-border areas between Greece and Bulgaria by the Organization "The Smile of the Child", in the framework of the implementation of the project "INTERSYC II".

We would like to thank the supporters for their participation in the implementation of the voluntary blood donations: 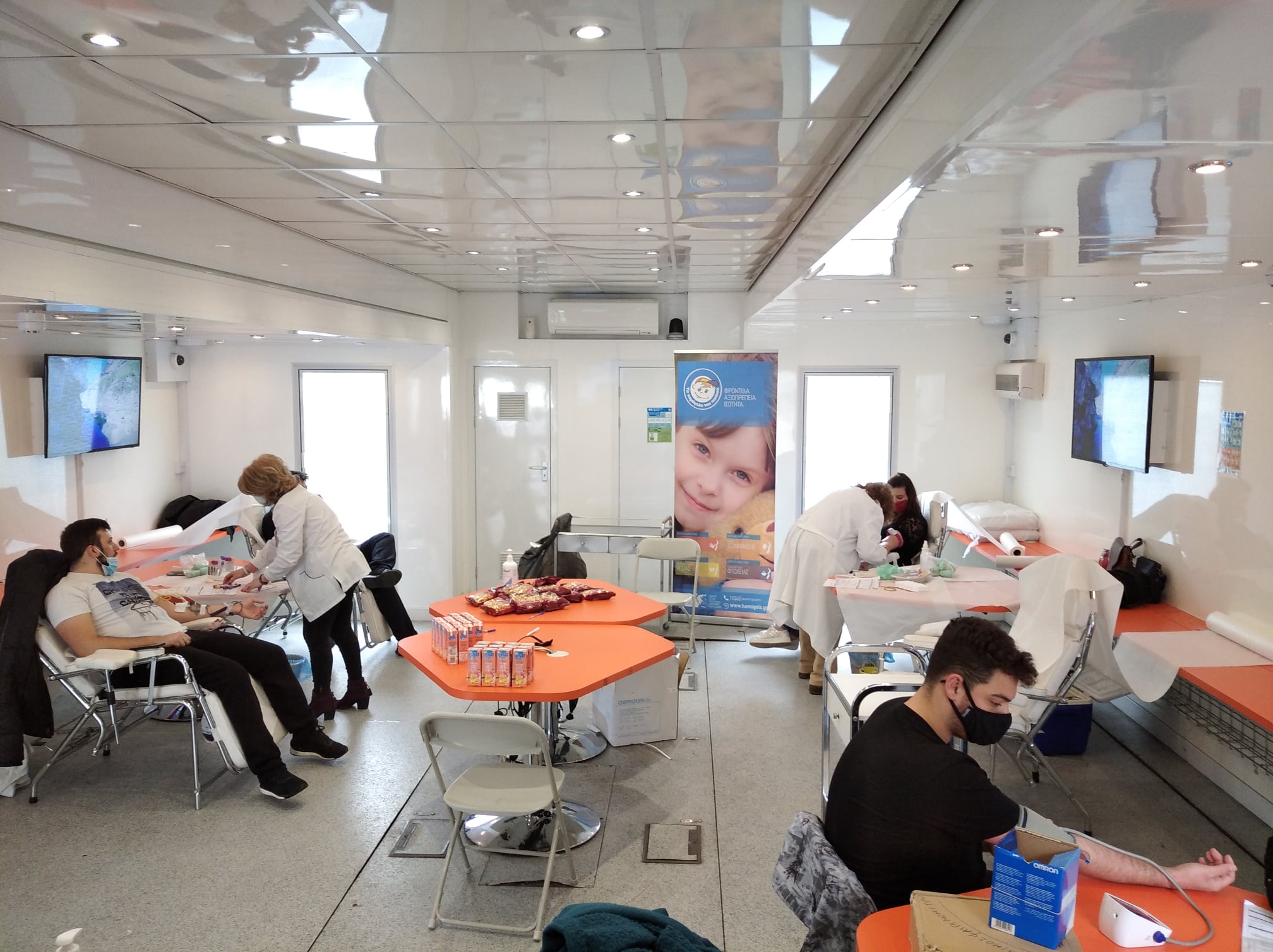 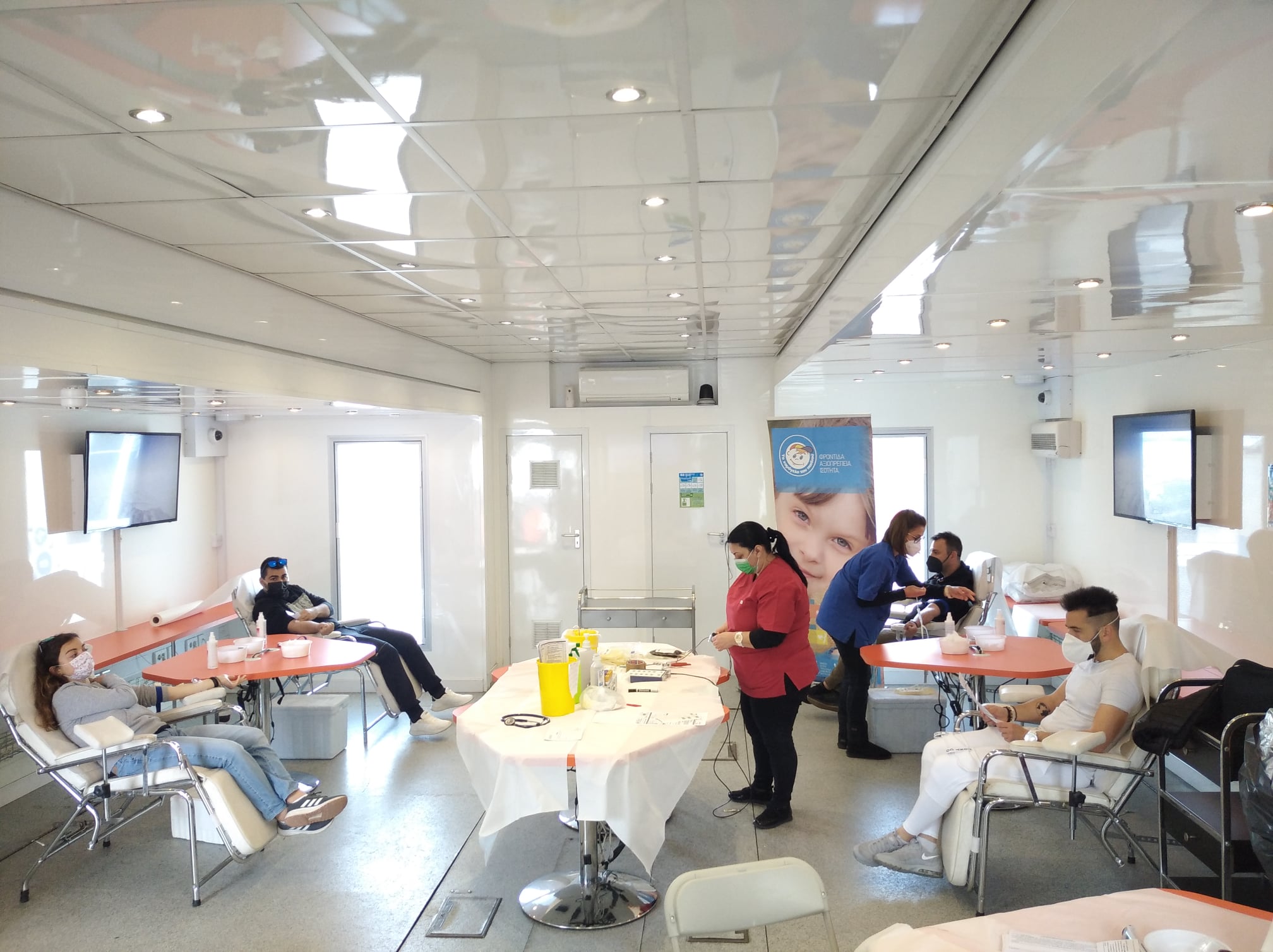 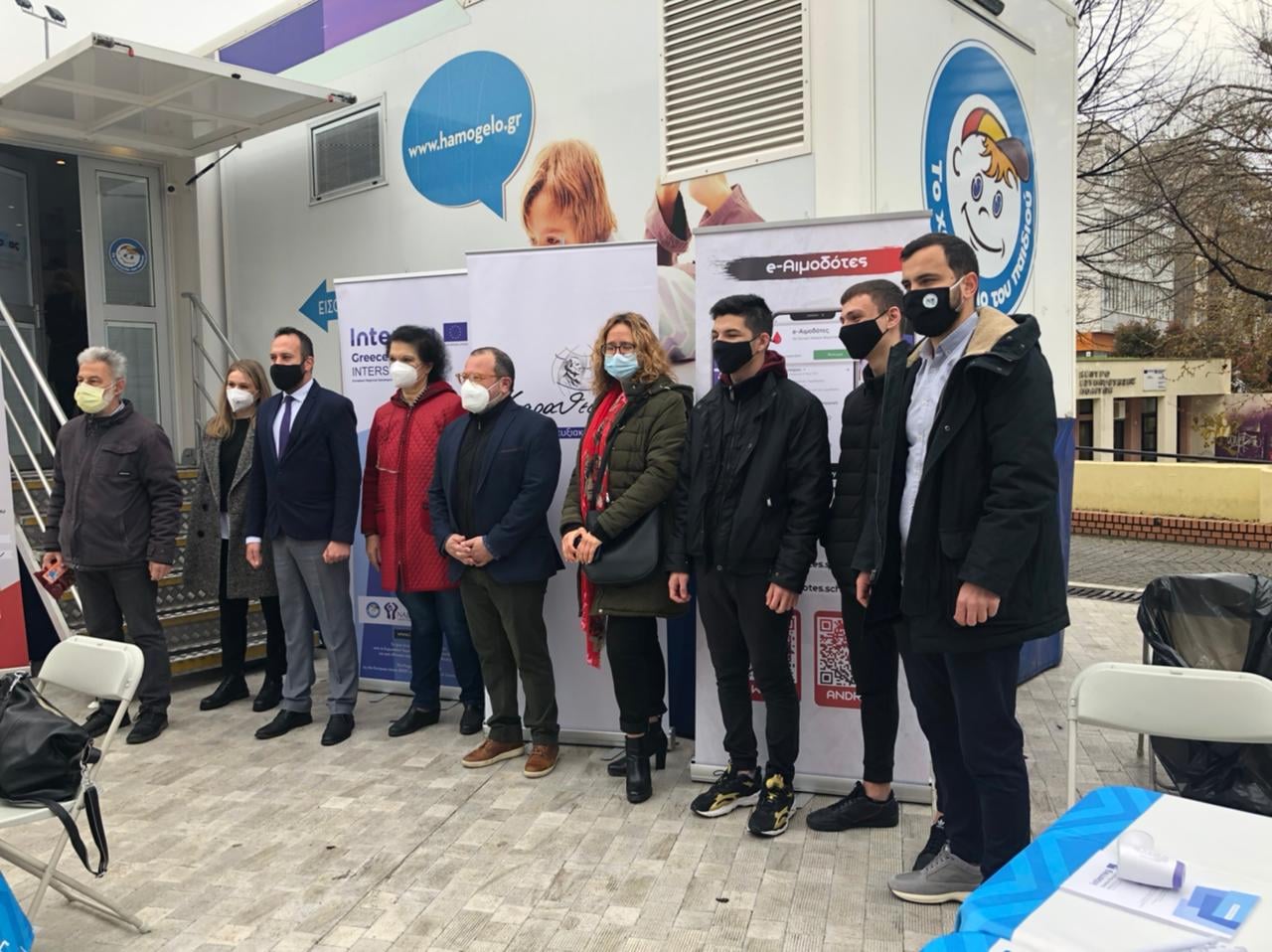 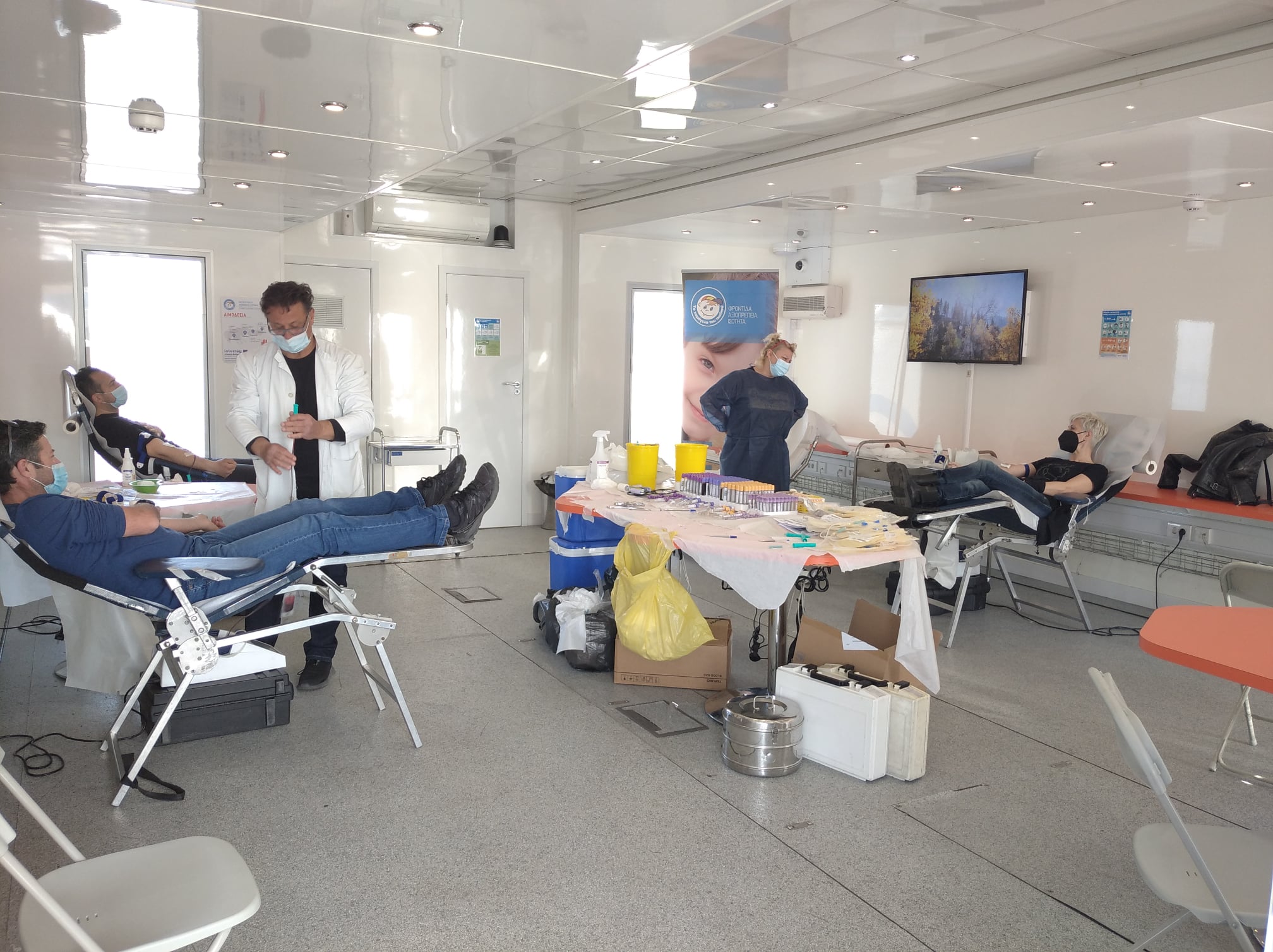 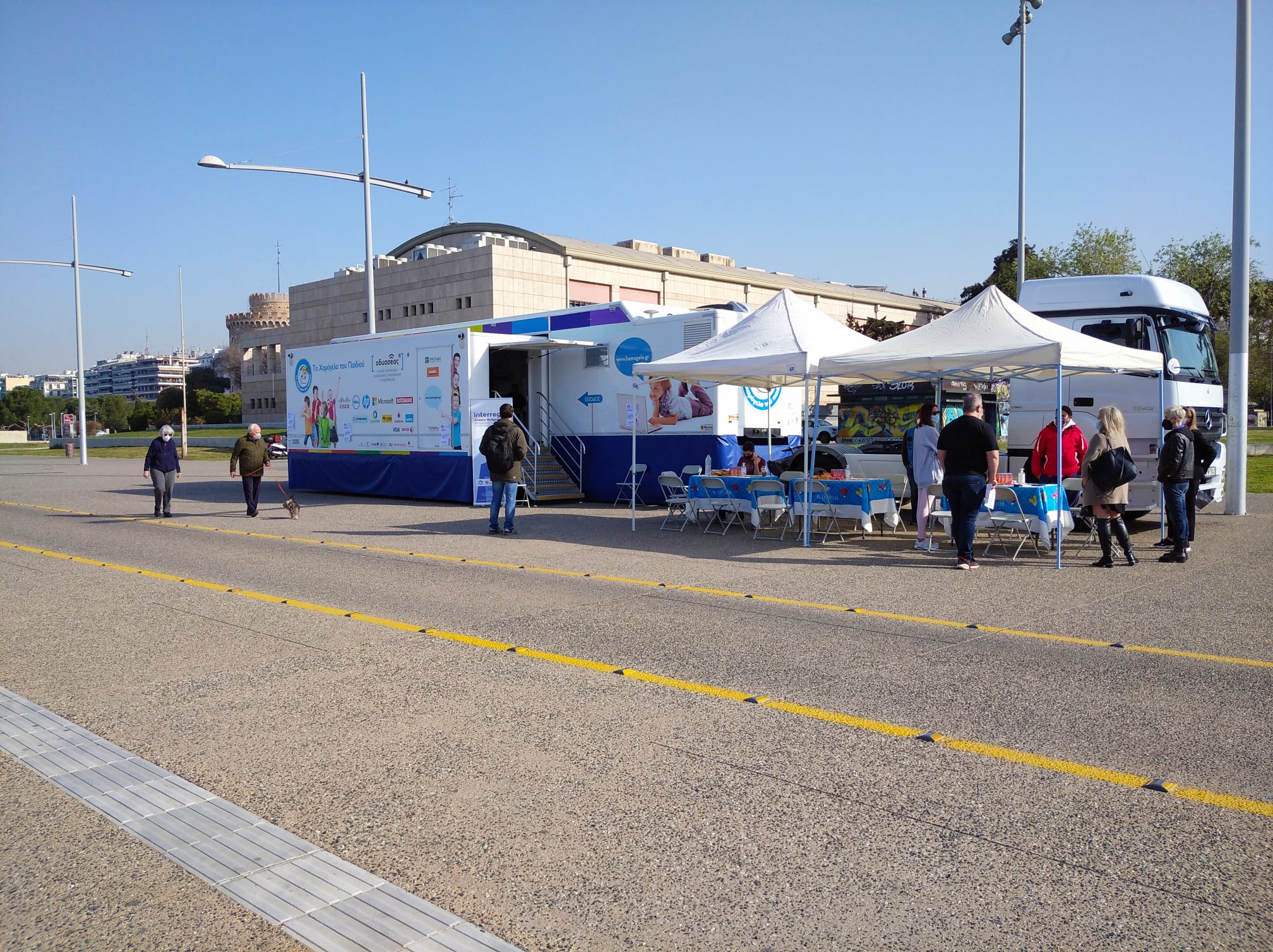